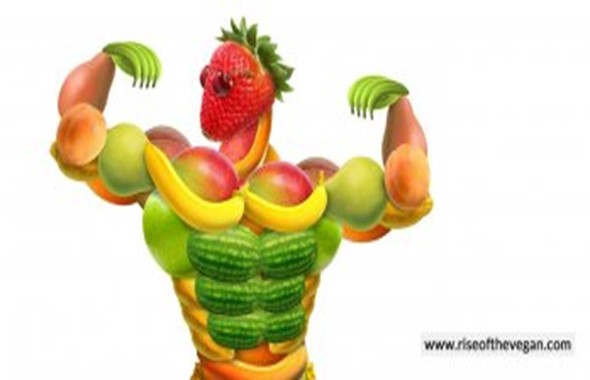 Plant Protein Shown to be Better than Animal Protein for Building Muscle!
New research published in the American Journal of Clinical Nutrition shows that both plant-based protein and meat build muscle equally well however because plant-protein comes with less 'baggage' in the form of harmful components it's the more beneficial protein source to use.

A study published last week in the American Journal of Clinical Nutrition found that dietary protein derived from plant sources built muscle just as well as protein from meat sources. However meat also comes with additional components that are harmful to our health, including antibiotic residue, hormones, saturated fat, trans-fats, endotoxins, cholesterol, Neu5Gc, heterocyclic amines and contaminants such as high levels of metals including copper and arsenic. These undesirable elements increase inflammation and promote various diseases thus making meat a less desirable option when building muscle and long term health are considered.

From 2002 to 2005, researchers from the Hebrew Senior Life's Institute for Aging Research and University of Massachusetts Lowell observed the muscle mass, strength, and bone density of 3,000 participants with varied dietary habits in the 17 to 72 age range. They found that while higher protein intake led to better overall musculoskeletal health, the source of dietary protein—plant or animal—was irrelevant. “We know that dietary protein can improve muscle mass and strength,” lead researcher Dr. Kelsey M. Mangano said. “However, until now, we did not know if one protein food source was better than another in accomplishing optimal results.”

And there’s no comparison between animal foods and plant foods when it comes to providing immune-boosting and cancer-fighting nutrients. Animal foods are either exceedingly low or devoid of antioxidants and tend to offer concentrated amounts of individual nutrients, like protein or calcium, while being deficient in many others. By contrast, plant foods are rich in antioxidants and provide a wide spectrum of vitamins, minerals, and other health-promoting nutrients.

Only plants contain powerful substances called phytochemicals, which scientists are now discovering protect us from cancer, heart disease, and other serious illnesses. Plants are also the primary source of all minerals in our diet. Minerals are derived from the earth and make their way into the food supply via plants. The only reason animal foods contain any minerals at all is because the animals eat plants. And plants are our only sources of dietary fiber, which binds in our intestines with fat, cholesterol, environmental pollutants and disease-causing hormones to eliminate these dangers from the body. Fiber also protects against bowel cancers, yet 97% of Americans don't meet the daily requirements for fiber intake.

Professional bodybuilders and weightlifters such as Mr Universe Barny Du Plessis, multiple world-record holding strongman Patrik Baboumian, of Germany, or Icelandic weightlifting champion Hulda B. Waage, amongst many others, are living proof of Mangano’s findings. People are already ditching whey in favor of vegan protein powders, which have seen a significant increase in sales, and a few months ago the largest collection of vegan muscle ever gathered in London for the Vegan Athlete's Summit.
Go Plant Strong!
Watch the Game Changers documentary movie of professional vegan athletes.